The 2021 ANZAC Friendship Weekend saw the Swans return to Vung Tau (we had to cancel in 2020) for the 11th time. An incredible weekend from start to finish!

Visit to the Long Hai school to visit My Huong and all the kids. The club was represented by Eric Kerrison, Jason Kane, Jake Norris, Callum Maxwell and Aleks Leitmanis.

The afternoon was spent enjoying an Auskick football session with the kids, followed by a well deserved ice cream for all. The club also donated much needed supplies such as rice and nappies. A glorious Vung Tau day greeted the playing group as they made their way to the Lord Mayors oval for a intra club day of games.

The day started with some a couple of demonstration games from the Irish, first, the girls took to the field for a game of Camogie and were then followed by the boys in a game of Hurling.

It was then time for the AFL, first game up was the all women’s intra club game. The improvement in these women’s skills over the past 12 months is very noticeable, it was a tight game, with inaccurate kicking proving to be the only difference between the sides as they both had 12 scoring shots. Next up we had the men’s game, this was also decided on the kicking inaccuracies of one team. The midfield delivery from the red team into the forward line, meant that Villa was able to have a field day and end up with 9 goals. 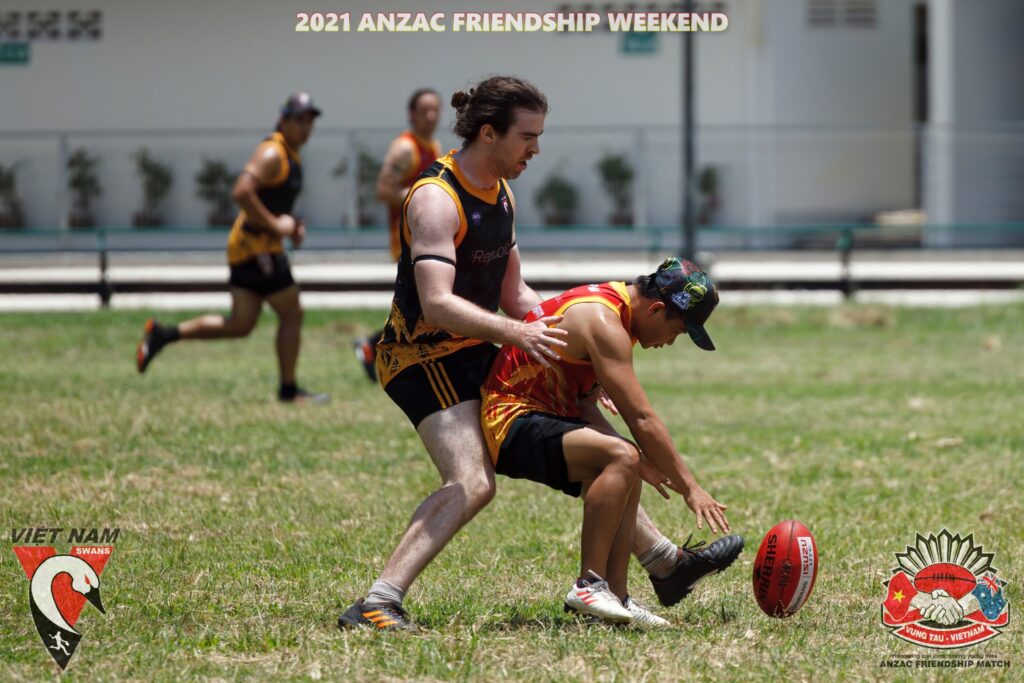 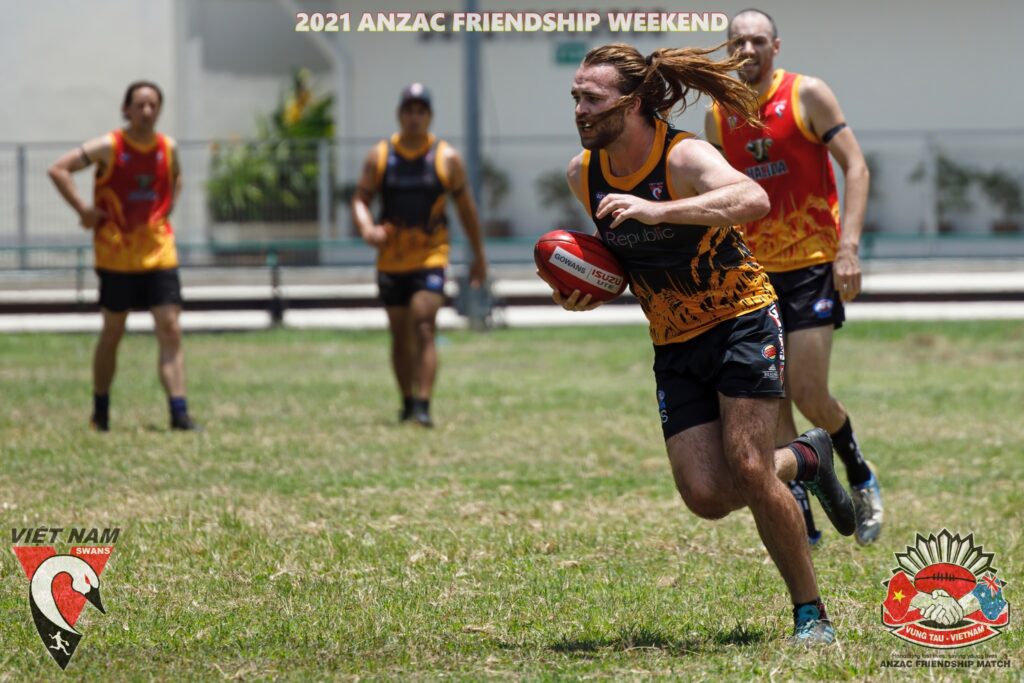 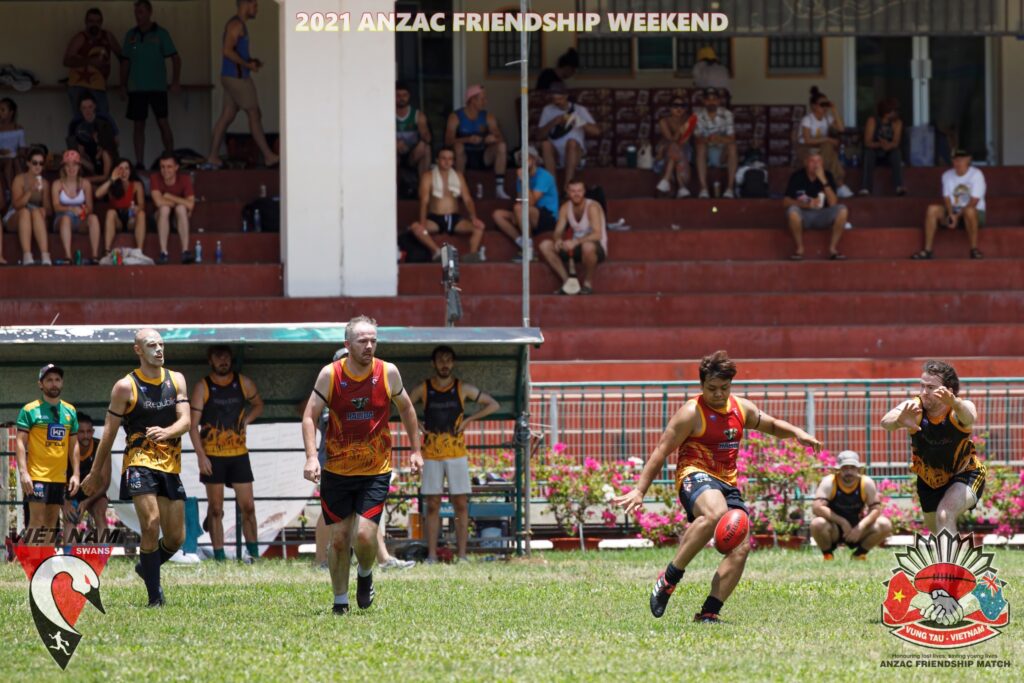 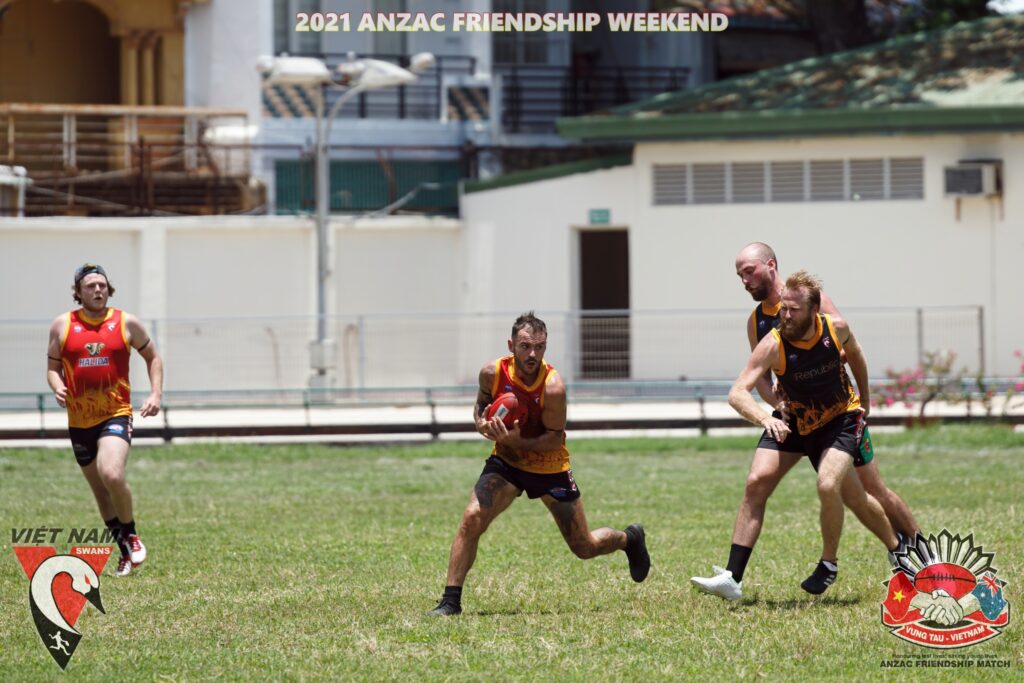 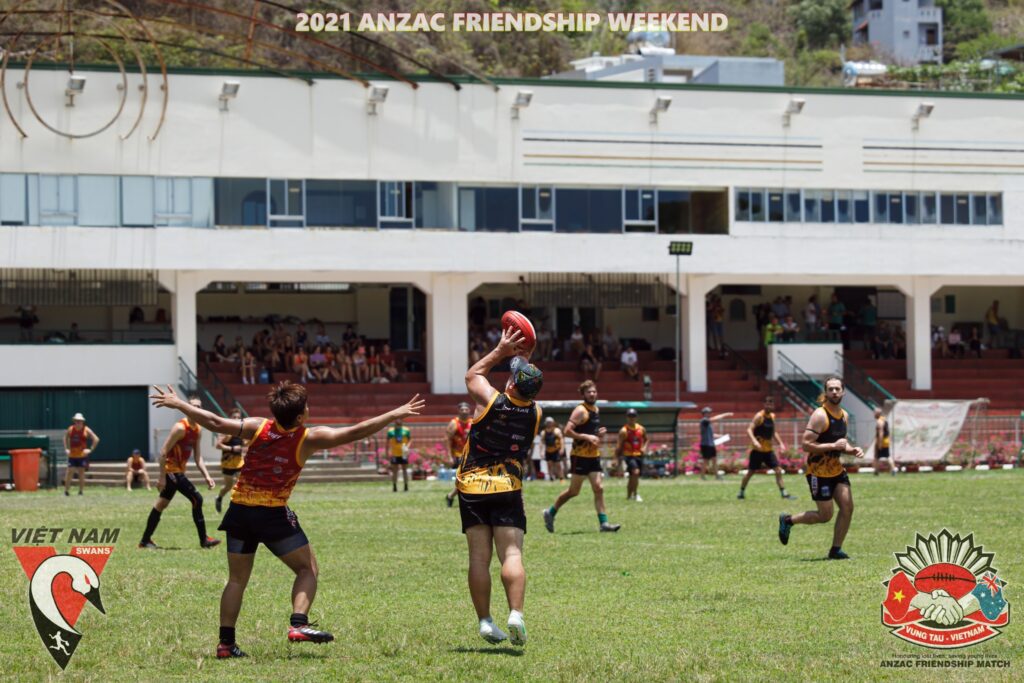 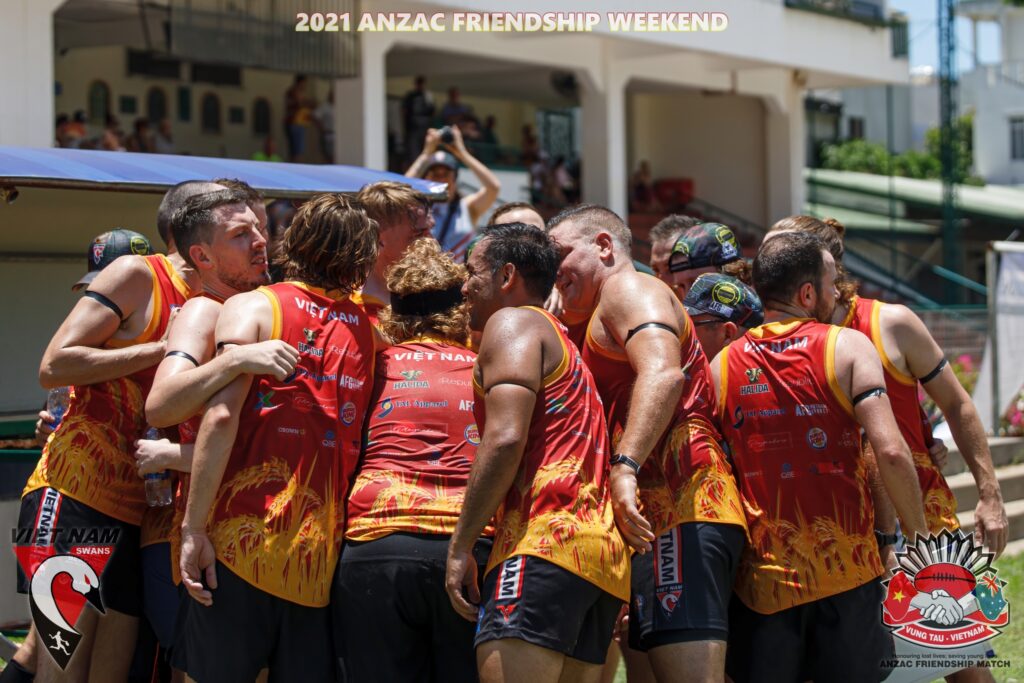 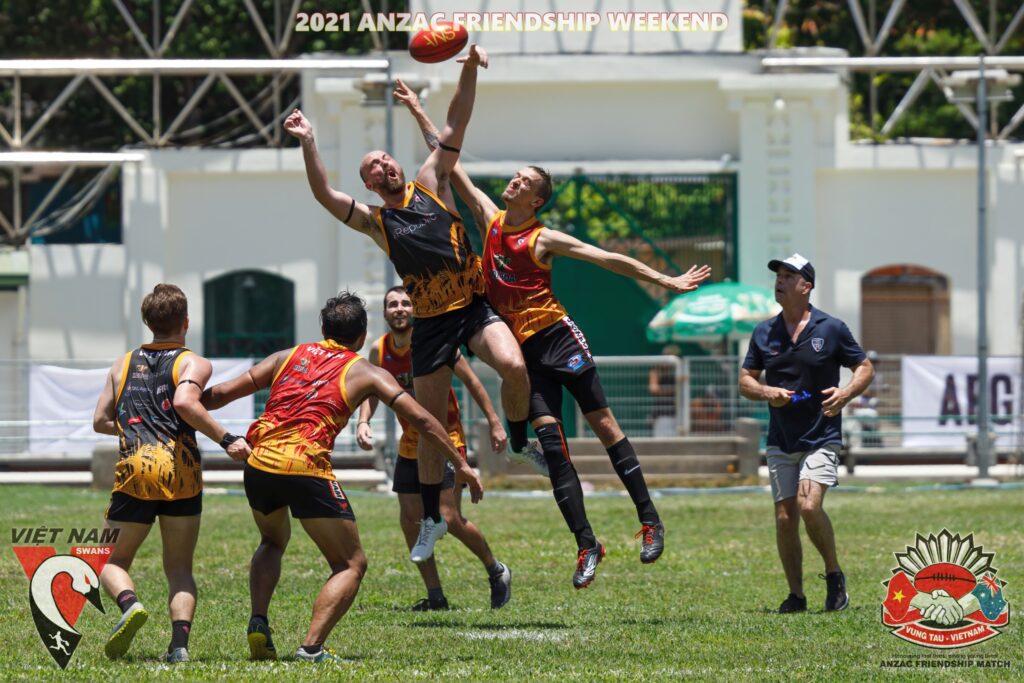 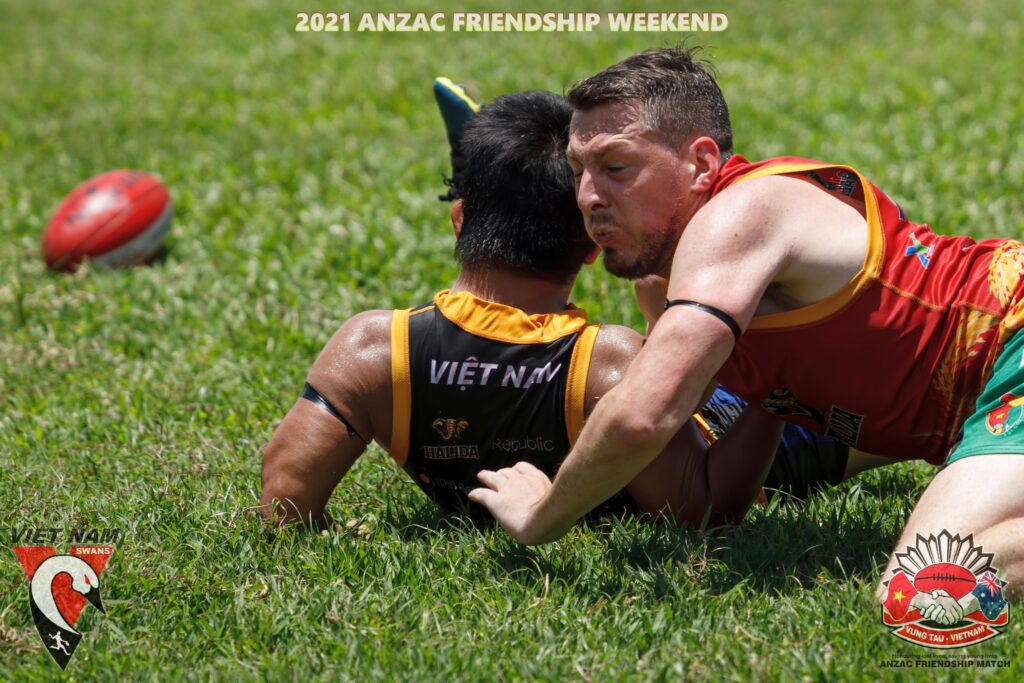 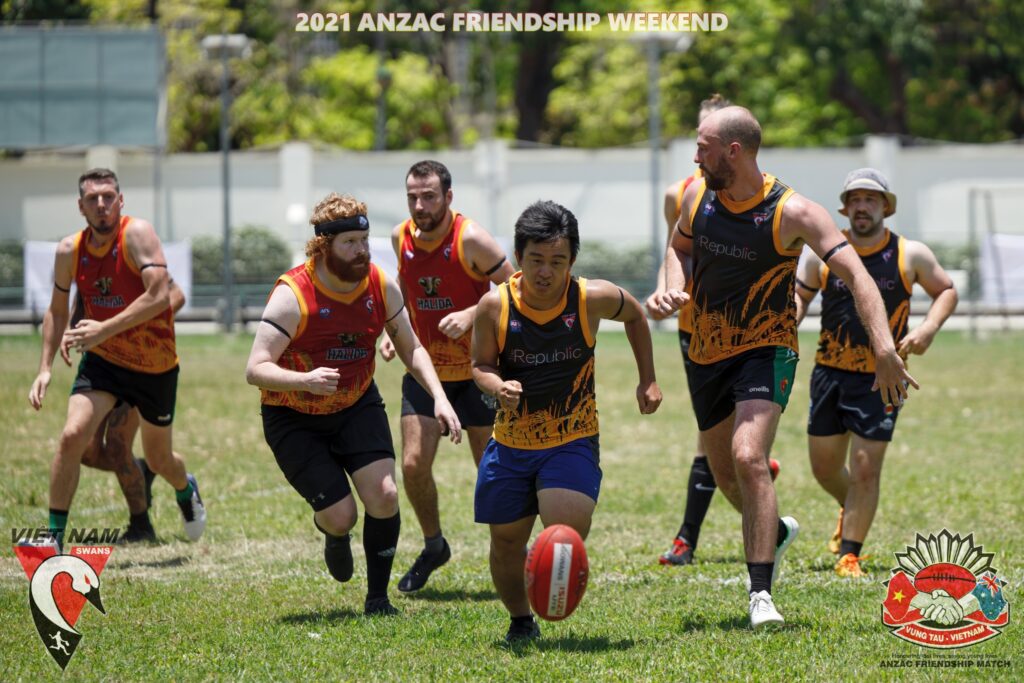 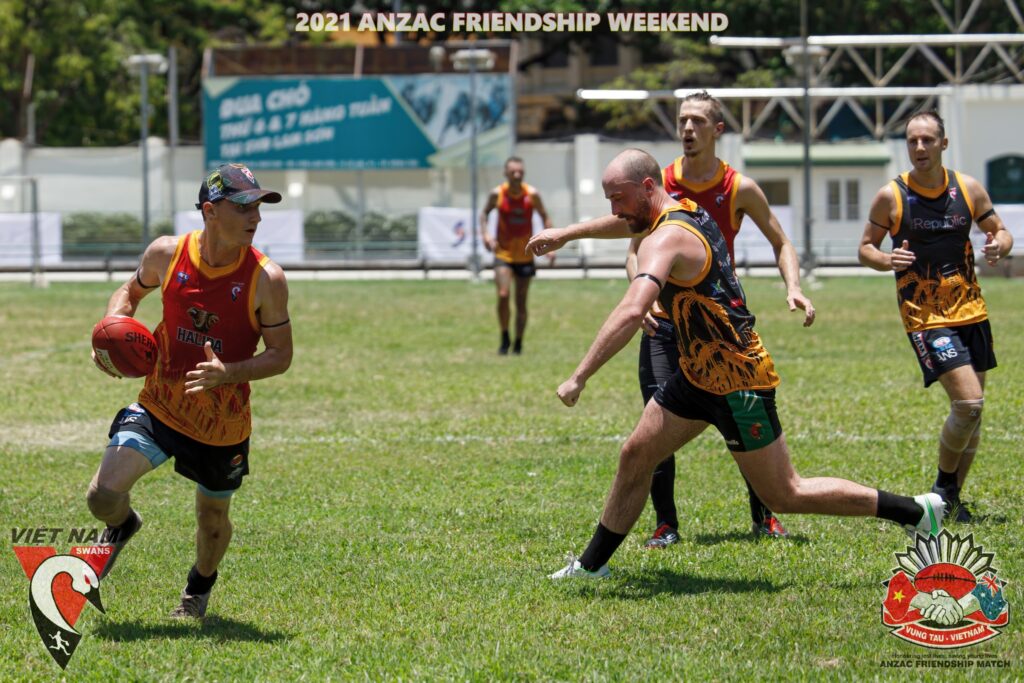 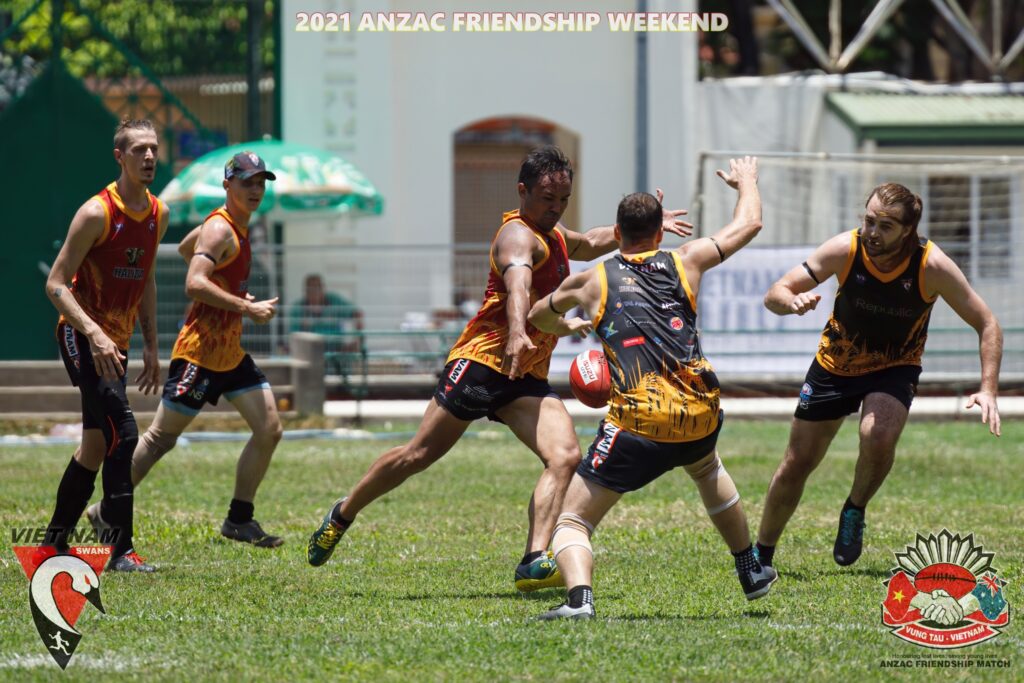 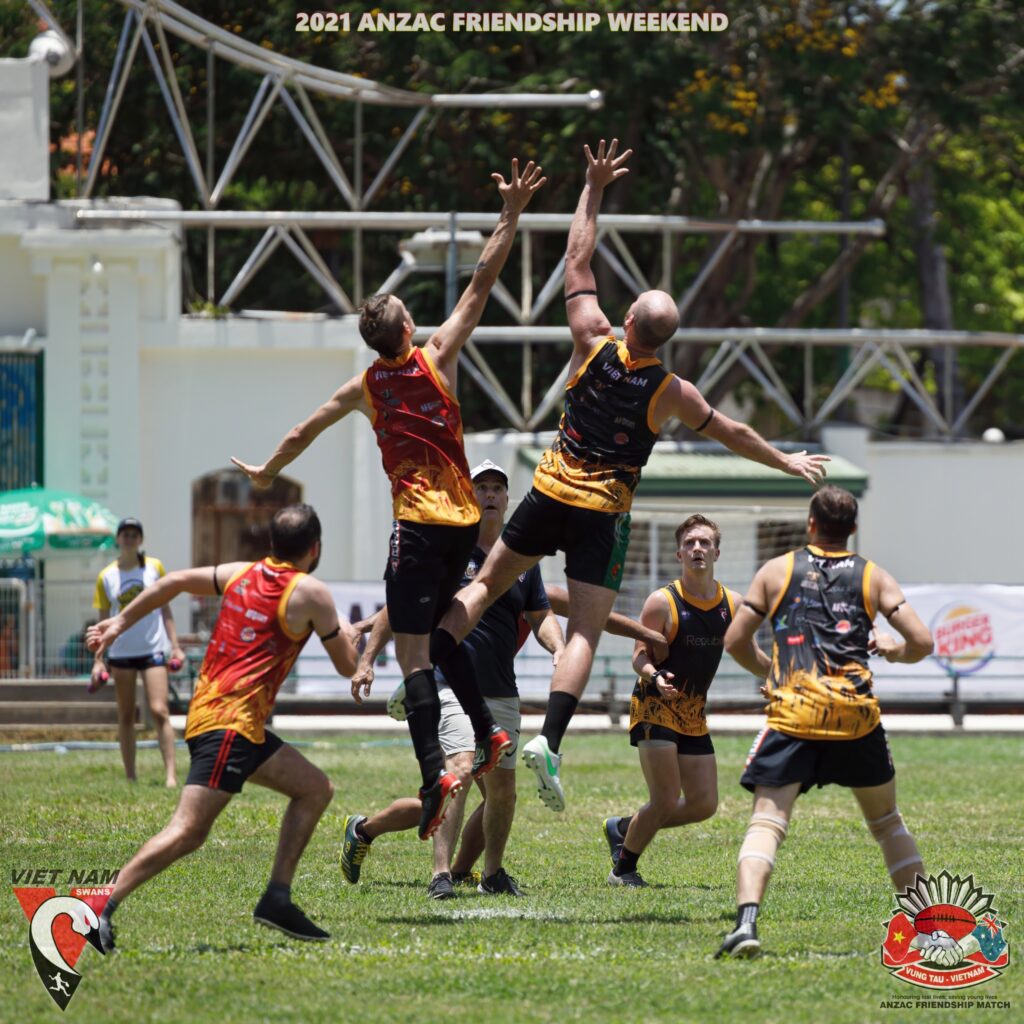 Massive thanks to  Art Gilbert for reciting the ode and playing an incredible Last Post and Reveille on the Bugle for us. After the lunch break, it was time for the new Vietnam League to start, it was going to be mixed games today, and it was going to get the ball rolling and the banter starting. It was a great afternoon in the league, played in exactly the right spirit.

The first game of the much anticipated Vietnam Football League saw the off field banter cease and on field action commence. Ironically the clear champions of off field banter – the Crabs + Crocs were fast out of the blocks comfortably accounting for the Bears + Buffalos. Could they keep putting their money where their mouths are throughout the day?

A closer game than the scoreboard indicates the Langurs + Vipers were just able to put it on the scoreboard. Slightly more organized team structure saw the Herons + Tigers turn it over a bit too much to apply any meaningful scoreboard pressure. Both teams entered Game 4 looking to get a first win up and in a low scoring affair either team could have. In the end it was the experienced veterans of the Bears + Buffalos who got the job done with both Tommy Sullivan and Grant ‘Pip’ Keating scoring majors to take the win. Facing the daunting back to back game vs the Crabs + Crocs (who curiously were the only team to not endure back to back games in the 40 degree heat!) the Herons + Tigers were facing a winless first day of VFL footy. in a bit of a shootout the girls hit the scoreboard big time with 2 goals from each team. In a tense second half the Herons+Tigers were able to keep their noses in front and take a narrow win avoiding being the only winless team on the day. After so much footy scoring was becoming close to impossible on heavy legs. The Langurs + Vipers had just enough in the tank to account for the Buffalos + Bears and carry a clean sheet through round 1 of the Vietnam Football League games. THe backline deserving the plaudits after giving up only 5 points all day for an incredible percentage of 1260% meaning the rest of the league will be chasing them for the rest of the season. The McMillan Dinner is always a highlight of the ANZAC Friendship Weekend and at the Pullman it was once again fantastic. John Suiker delivered a fantastic Middleton Address and the club inducted 6 worthy Life Members:

See the detailed article for more information on these worthy inductees.

We also gave long time player, captain, committeeman Billy Crang the highest possible recognition from the club, inducting him to the Hall of Fame – you can read more in the detailed article. Sunday being ANZAC Day we were treated to being able to commemerate the most important day on the Australian calendar with the Vung Tau expat community – many of whom are veterans who have served our country. Our ANZAC Friendship weekend is focused on recognizing both sides of all wars and the incredible sacrifices made. We wear 2 black arm bands on the field and are especially quick to acknowledge the incredible sacrifice made by Vietnamese service men and women in protecting their country we are now lucky enough to call home. A dawn gathering was held at the back beach before breakfast at Belly’s Watering Hole and an ANZAC ceremone at Downunder Bar before lunch with the Pies Essendon game on the big screens at Billabong Bar. A truly memorable and fitting end to an amazing ANZAC Friendship Weekend! 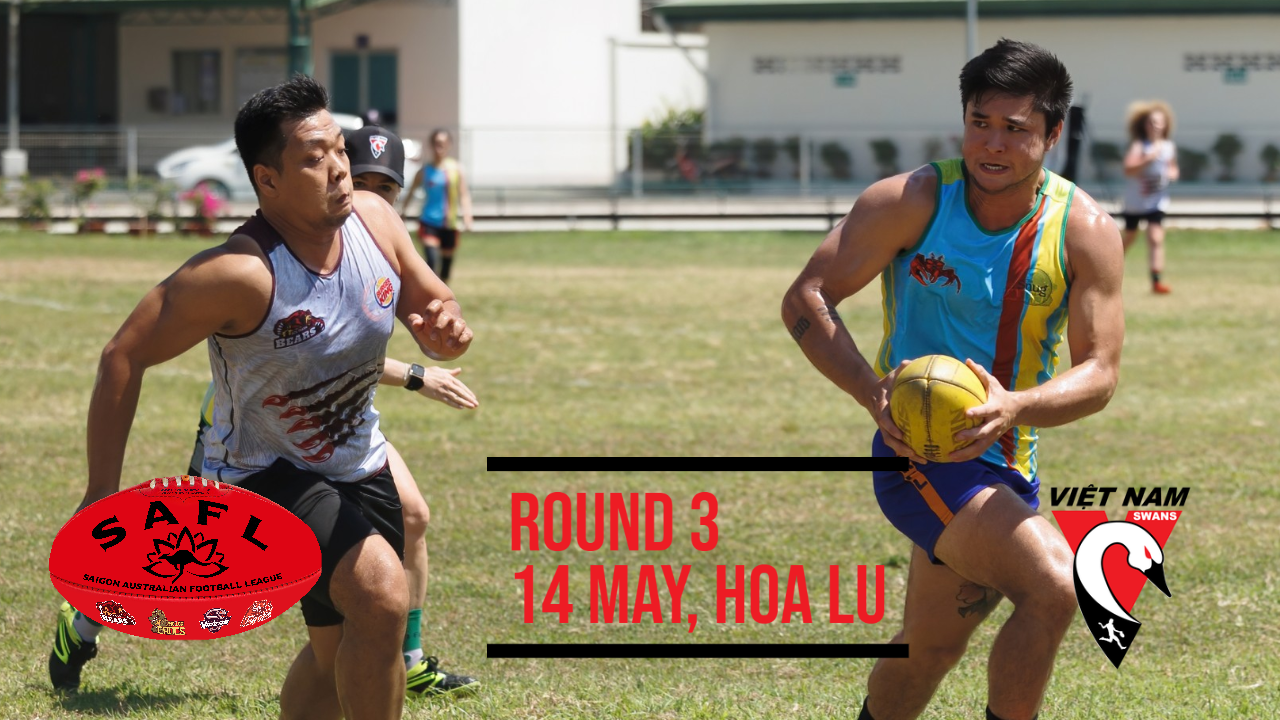 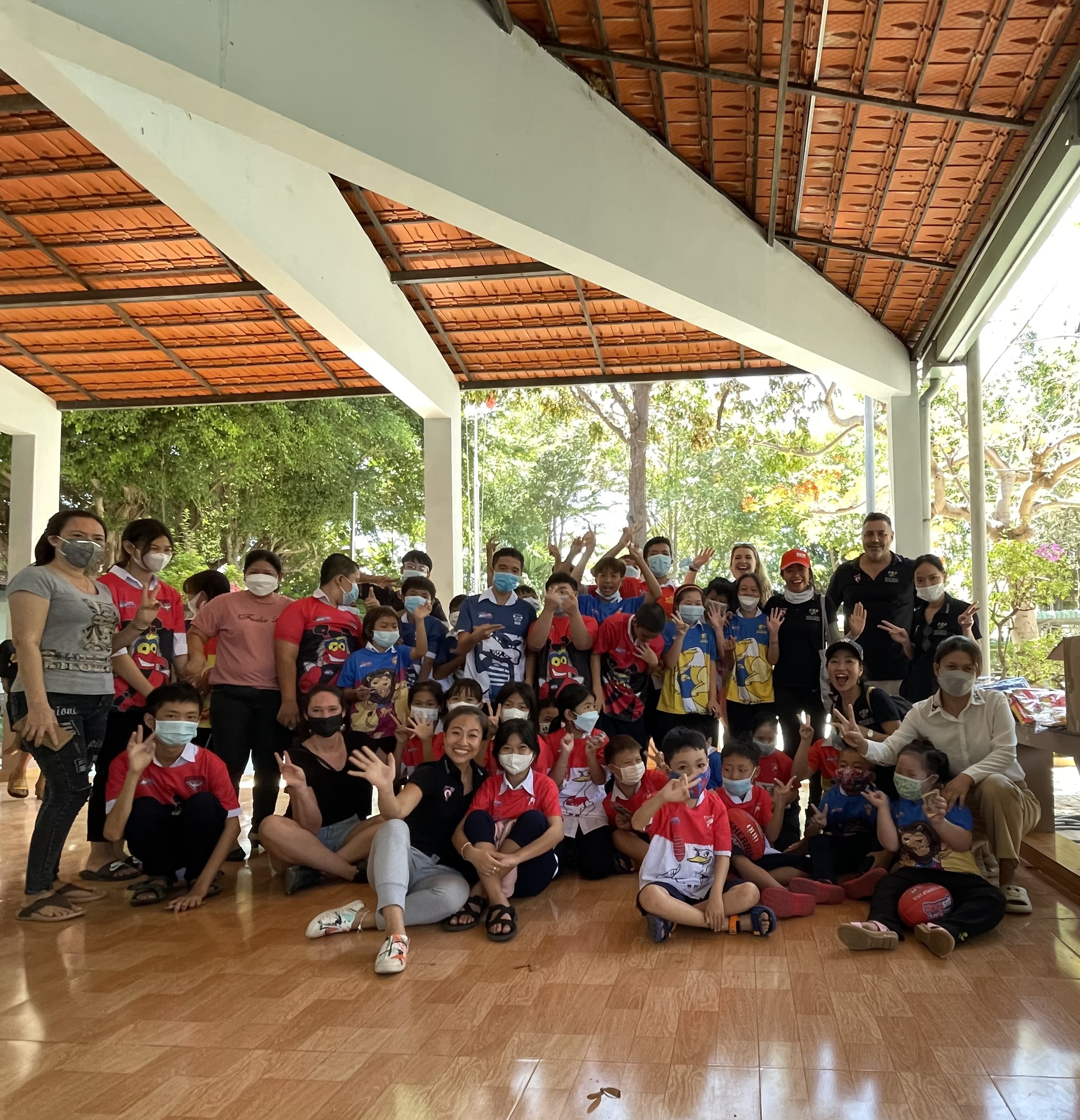